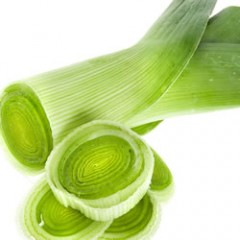 Leek is an expensive crop to grow, because it is labor intensive. Hand labor is required for all stages of production including: transplanting, weeding, harvesting, washing and packing.

Information on cultural practices and pests of leeks can be found in the Leek Pest Management Strategic Plan.

Year two of the leek variety trial brought completely different weather and challenges, and brought forth some different high performing varieties. However, 'Chinook', 'Lancia' and 'Defender' proved to be top performers in both years, demonstrating disease resistance, vigor, and high uniformity. This year we replicated the varieties, allowing for statistical analysis, but the tremendously different growing seasons lead us to recommend looking at results from both years as worth considering. The notable challenges from this season were very regular rains during July and parts of August, and subsequent very high disease pressure. The previous season was much drier and disease pressure was negligible.

Results from the 2021 Leek Variety Trial

Preparing for the Fall Flight of Allium Leafminer

The invasive fly pest, allium leafminer (Phytomyza gymnostoma), has been established in the Northeast since 2016 and has caused crop damage as far north as Washington County, NY, as far east as central Connecticut, and as far west as the Finger Lakes region of NY. In research trials, the fall flight has caused damage to over 98% of leeks that were not covered or managed with insecticides.

Results of the 2020 leek variety trial with 36 varieties

A new invasive insect pest in the Northeast known as the Allium leafminer (ALM), Phytomyza gymnostoma, damages crops in the Allium genus (e.g., onion, garlic, leek, scallions, shallots, and chives) and is considered a major economic threat to Allium growers. Originally from Europe, ALM was first detected in Lancaster County, Pennsylvania in December of 2015 and in New Jersey and New York in 2016. As of fall 2017, ALM activity has been confirmed throughout eastern Pennsylvania, New Jersey, Delaware, southeastern New York as well as Thompkins and Suffolk counties.

Last year we saw a lot of problems with root feeding damage from maggots early in the season, which has growers on edge about pest pressure this year. Seed corn maggots can damage a variety of crops, and in previous years have been observed on everything from sunflower shoots in the greenhouse to pea seedlings and onion transplants in the field. Onion maggots are more particular, and will only feed on allium hosts.

Leek Moth was detected in four home gardens in Plattsburg, NY in 2009. It was first detected in Ontario, Canada in 1997 where it has become problematic especially to small-scale, organic growers in eastern Ontario and to commercial producers in western Quebec, who have limited insecticides available to them.

Leek Moth continues its spread to more farms and gardens across the U.S., a new comprehensive website is available to aid in the identification and management of this pest. This Cornell website features maps of the distribution of leek moth, protocols on insect monitoring and identification, best management practices for farms and home gardens, a photo gallery of damage symptoms and a comprehensive resource section.

Supervisors are critical to the success of farm businesses. They have a major impact both on employees' daily work experiences and on the production performance of the business. The  agricultural Supervisory Leadership certificate helps farm supervisors and managers learn and apply human resource management practices and leadership skills that foster rewarding workplaces and drive business results. Confident managers who thoughtfully apply leadership and management skills improve employee performance, develop teams, reduce employee turnover, and increase employee engagement. The courses within the certificate program will offer extensive practice and engagement activities to build confidence and skill sets.

University of New Hampshire Extension Field Specialist Emeritus, George Hamilton will demonstrate the importance of and best techniques to calibrate air blast sprayers. Proper calibration will ensure effective, efficient, economical and legal spraying.  Inadequate spray coverage is usually the cause of poor spray efficacy and additional spray applications. Overuse of some sprays results in unhealthy residues and can lead to fines.

Calibration should be done several times each season, or when you incorporate any new equipment or repairs - from the tractor to the nozzle.  Join us for a refresher or send new employees for training.  This workshop is open for any grower that relies on an airblast sprayer to deliver plant protectants to fruit or vegetable crops.

Join us in Peru on July 20th as we discuss orchard weed and soil management! Speakers will be joining us from across Cornell's research and extension teams.  Topics will include the results of our herbicide timing trials, new vision-guided technologies for orchard weed spraying, organic weed management options, soil health demonstrations, and a discussion on our statewide orchard soil health survey. DEC credits are pending for this event.

Prepare your sprayer and make sure you have the insecticides of choice on hand. Click on the following link for the revised 2021 SWD Insecticide Quick Guide: https://rvpadmin.cce.cornell.edu/uploads/doc_981.pdf

Current recommendations are to use the most effective material you can early in the spray program - even though the population seems small. The strategy is to keep the population small for as long as possible as it's very hard to gain control after the numbers have ballooned.

We are developing new ways to connect with the CCE ENYCHP team this year! We have a Youtube page located at this link. Check out videos on Table Grape Production, Pest Updates and the 20 Minute Ag Manager - in 4 Minutes series.
We have a Facebook Page here as well as an Instagram page. We keep these places updated with current projects, events, and other interesting articles and deadlines.
There are also text alerts available. Fruit and vegetable farmers in 17 Eastern NY counties can now receive real time alerts on high risk disease and pest outbreaks texted directly to their cell phone. The Eastern NY Commercial Horticulture program, which is supported by local Cornell Cooperative Extension associations, will now offer text alerts to those that enroll in our program in 2019.
The text alerts will be reserved for important crop alerts that could impact management decisions immediately. For instance, if there were an outbreak of Late Blight in the area, this would be transmitted to vegetable growers.

Farmers can choose the crop for which they wish to receive updates. Additionally they can request that Ag Business Alerts be sent to them. These alerts might include due dates for crop insurance deadlines, market opportunities etc.
If you have questions, please contact enychp@cornell.edu

Episode description:
In this episode, vegetable specialists Ethan Grundberg, Elisabeth Hodgdon, Jud Reid, and grower Leon Vehaba discuss winter greens production in Eastern New York. They highlight research results from the past five years that aimed to develop nitrogen fertility and heating recommendations for winter high tunnel greens production. Leon discusses his lessons learned from his experience at the Poughkeepsie Farm Project and how he made changes to his greens production as a result.